A new version of Modernizer, a JavaScript library that helps with adding new web technologies to sites while handling older browsers gracefully, is available with lots of cool improvements. It works by detecting browser capabilities and then letting you define css code to take advantage of a certain feature or alternative code if it is missing. Check it out!

On May 6, 2010, the US Stock Market saw a 1000 point drop followed by a huge recovery in only a few minutes. There were many theories put forward at the time as to what caused the flash crash, but a company called Nanex, a provider of a high-performance, real-time streaming datafeed for all of the major exchanges, did an in depth analysis and their conclusion was that it was caused by a design error at the NYSE.

From Analysis of the "Flash Crash"

In summary, quotes from NYSE began to queue, but because they were time stamped after exiting the queue, the delay was undetectable to systems processing those quotes. On 05/06/2010 the delay was enough to cause the NYSE bid to be just slightly higher than the lowest offer price from competing exchanges, but small enough that is was difficult to detect. This caused sell order flow to route to NYSE -- thus removing any buying power that existed on other exchanges. When these sell orders arrived at NYSE, the actual bid price was lower because new lower quotes were still waiting to exit a queue for dissemination.

This situation led to orders executing against whatever buy orders existed in the NYSE designated market maker (DMM) order book. When an order is executed, the trade is reported to a different system (CTS) than quotes (CQS). Since trade report traffic is much smaller than quote traffic, there is rarely any queueing or delay.

Because many of the stocks involved were high capitalization bellwether stocks and represented a wide range of industries, and because quotes and trades from the NYSE are given higher credibility in many HFT systems, when the results of these trades were published a few milliseconds later, the HFT systems detected the sudden price drop and automatically went short, betting on capturing the developing downward momentum. This caused a short term feed-back loop to develop and panic ensued.

Another interesting tidbit is that they detected what they termed, "Quote Stuffing", were 1000s of quotes per second were being generated for certain stocks from a particular exchange. They surmised that it may have been a form of HFT warfare, where one HFT system generates these quotes so that all of the competing HFT systems will spend precious milliseconds processing them, giving the instigator an edge. They predict that if this behavior is not prevented, soon every HFT system will be using this tactic and pretty much meltdown the whole system. Incredible.

The analysis is at http://www.nanex.net/20100506/FlashCrashAnalysis_Intro.html.

Apple has made all of the 2010 WWDC session videos available for download for anyone who has registered as an Apple developer. This means they are essentially free! The major focus for WWDC was the new iOS 4 and with iPhone 4s starting to show up in people's hands, the time is right to be learning about these new features and to be updating your apps.

Just like XBOX Live or Playstation Network, this service will make adding social gaming much easier for apps developed on the iPhone or iPad. The following is from appleinsider.com:

Game Center is Apple's new social gaming network for the iOS platform, which allows users to login to an account, invite friends to play games, find other users to join into multiplayer games, track achievements within games, and compare scores in leader board listings.

In addition to the new Game Center app, iOS 4 includes a series of GameKit APIs for developers that enable them to add Game Center support to their apps.

iPhone 4 and iOS 4 at Gizmodo.com

I am a little surprised that Steve Jobs only talked about the iPhone during his keynote address at WWDC. I know it is an important area for them and certainly the area that has the most buzz right now, but it would be good to also know what they have planned for the mac. Perhaps they will address this in later sessions. In any case, new iPhone looks yummy. Nice screen, resolution independence, 2 cameras to do video chats and no more unlimited data plans. Hmmm, something seems amiss. The break down of what was announced is at Gizmodo.

Saya turned 18 months old today and I can't believe how much she has grown. She is picking up so many words and can say about half of the letters of the alphabet. Sharp as a tack. 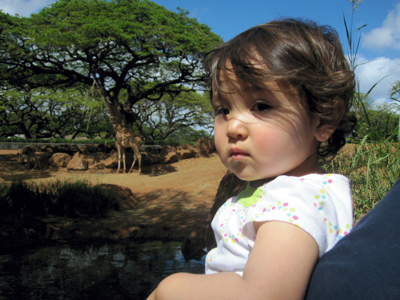 Apple's developer conference kicks off next week and I will be interested to hear what comes out of it. iPhone 4G seems a certainty and iPads are all the rage, but I wonder what else they have up their sleeves. Our CIO is attending the keynote which is again hosted by Steve Jobs, so we should get a sense for where Apple is heading.